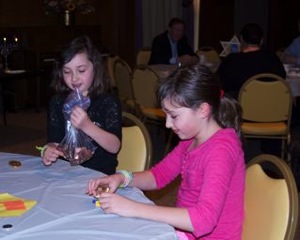 Hanukkah (also spelled Chanukah) is a joyous holiday, celebrating a great victory for religious freedom won by Jews, let by Judah the Maccabee, more than two thousand years ago. The word Hanukkah means "dedication", as the victors purified and rededicated the Temple in Jerusalem. It is said that only enough holy oil for one day was found, but that it burned for eight days while new oil was prepared. Candles are lit every night of the eight-day holiday in a 9-branched candelabrum called a menorah. Traditions include eating foods fried in oil, such as potato pancakes (latkes) and doughnuts (sufganiyot).

Children are often given chocolate candies in the shape of coins, termed Hanukkah gelt. A four-sided spinning top, called a dreidel, is used in a popular game. The four sides of the top contain four letters of the Hebrew alphabet - Nun, Gimel, Hay, Shin - which forms an acronym for "Nesh Gadol Hayah Sham", or "A Great Miracle Happened There".. In Israel, the Shin is changed to a Peh, for Po meaning "here". It has been said that during the time of the Maccabees Jews were not free to openly practice their religion, so when they gathered to study Torah they would bring a top with them. If soldiers appeared, they would quickly hide what they were studying and pretend to be playing a gambling game with the top.